When you create a table on MariaDB ColumnStore, the system creates at least one file per column in the table. So, for instance, a table created with three columns would have a minimum of three, separately addressable logical objects created on a SAN or on the local disk of a Performance Module. 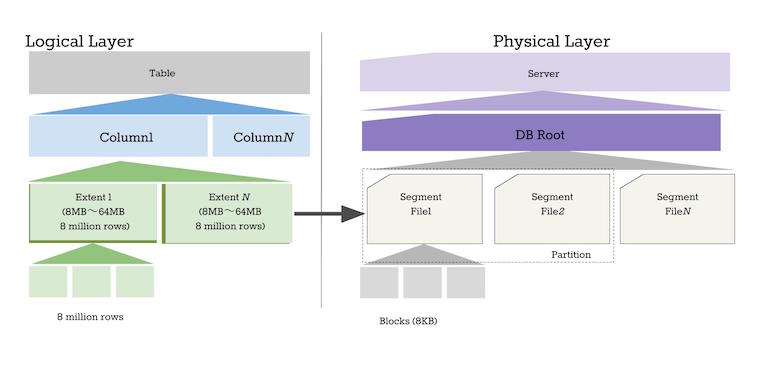 Extents are physically stored as a collection of blocks. Each block is 8KB. Every database block is uniquely identified by its Logical Block Identifier, or LBID.

Collectively, all of a column's segment files for one or more extents for a partition. This is the horizontal partitioning in ColumnStore. Partitions are stored in hierarchical structures organized by segments, (that is, folders). ColumnStore meta-stores maps file structure and location to the DB schema as well as in the FilesPerColumnPartition in the ColumnStore.xml file. The default value is 4. Additionally, by default, ColumnStore compresses data.

ColumnStore uses a smart structure called an Extent Map to provide a logical range for partitioning and remove the need for indexing, manual table partitioning, materialized views, summary tables and other structures and objects that row-based databases must implement for query performance.

Extents are logical blocks of space that exist within a physical segment file, and is anywhere between 8 and 64 MB in size. Each Extent supports the same number of rows, with smaller data types using less disk space. The Extent Map catalogs Extents to their corresponding blocks (LBID's), along with minimum and maximum values for the column's data within the Extent.

The primary Performance Module has a master copy of the Extent Map. On system startup, the file is read into memory, then physically copied to all other participating User and Performance modules for disaster recovery and failover. Nodes keep the Extent Map in memory for quick access. As Extents are modified, updates are broadcast to participating nodes.

Using the Extent Map, ColumnStore can perform logical range partitioning and only retrieve the blocks needed to satisfy the query. This is done through Extent Elimination, the process of eliminating Extents from the results that don't meet the given join and filter conditions of the query, which reduces the overall I/O operations. 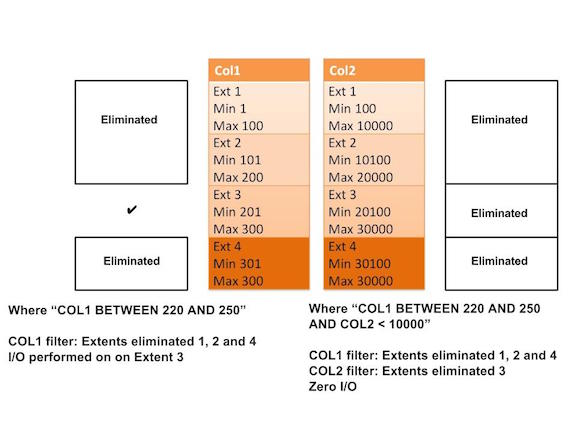 This behavior is automatic and well suited for series, ordered, patterned and time-based data, where the data is loaded frequently and often referenced by time. Any column with clustered values is a good candidate for Extent Elimination.

In columnar storage, similar data is stored within each column file, which allows for excellent compressibility. While the actual space savings depends on the randomness of the data and the number of distinct values that exists, many data-sets show compression rates saving between 65% and 95% space.

By default, compression is turned on in ColumnStore. In addition, you can enable or disable it at the table-level or column-level, or control it at the session-level by setting the infinidb_compression_type system variable. When enabled, ColumnStore uses snappy compression.

MariaDB ColumnStore uses the Version Buffer to store disk blocks that are being modified, manage transaction rollbacks, and service the MVCC (multi-version concurrency control) or "snapshot read" function of the database. This allows it to offer a query consistent view of the database.

All statements in ColumnStore run at a particular version (or, snapshot) of the database, which the system refers to as the System Change Number, (SCN).

Note: Although it is called a "buffer", the Version Buffer uses both memory and disk structures.

How the Version Buffer Works

The Version Buffer uses in-memory hash tables to supply memory access to in-flight transaction information. It starts at 4MB with the memory region growing from that amount to handle blocks that are being modified by a transaction. Each entry in the hash table is a 40-byte reference to the 8KB block being modified.