You are viewing an old version of this article. View the current version here.

Vagrant is a tool to create and manage development machines (Vagrant boxes). They are usually virtual machines on the local host system, but they could also be Docker containers or remote machines. Vagrant is open source software maintained by HashiCorp and released under the MIT license.

Vagrant benefits include simplicity, and a system to create test boxes that is mostly independent from the technology used.

In this page we discuss basic Vagrant concepts.

A Vagrant machine is compiled from a box. It can be a virtual machine, a container or a remote server from a cloud service.

A provider is responsible for providing the virtualization technology that will run our machine.

A provisioner is responsible for installing and configure the necessary software on a newly created Vagrant machine.

The above concepts are probably easier to understand with an example.

The following diagram should make the example clear: 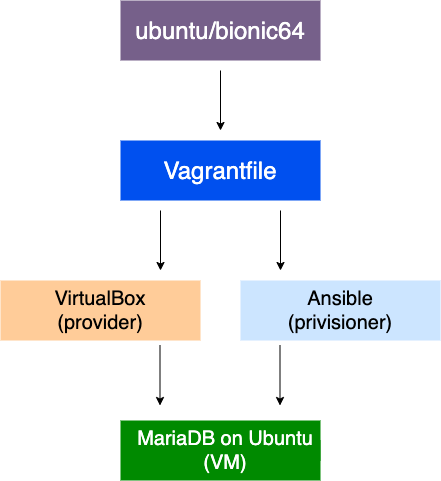 A Vagrantfile is a file that described how to create one or more Vagrant machines. Vagrantfiles use the Ruby language, as well as objects provided by Vagrant itself.

A Vagrantfile is often based on a box, which is usually an operating system in which we are going to install our software. For example, one can create a MariaDB Vagrantfile based on the ubuntu/trusty64 box. A Vagrantfile can describe a box with a single server, like MariaDB, but it can also contain a whole environment, like LAMP. For most practical use cases, having the whole environment in a single box is more convenient.

Boxes can be searched in Vagrant Cloud. Most of their Vagrantfiles are available on GitHub. Searches can be made, among other things, by keyword to find a specific technology, and by provider.

A provider adds support for creating a specific type of machines. Vagrant comes with several providers, for example:

Alternative providers are maintained by third parties or sold by HashiCorp. They allow to create different types of machines, for example using VMWare.

To find out how to develop your own provider, see Plugin Development: Providers in Vagrant documentation.

Some examples of useful providers, recognised by the community:

A provisioner is a technology used to deploy software to the newly created machines.

The simplest provisioner is shell, which runs a shell file inside the Vagrant machine. powershell is also available.

This is a list of the most common Vagrant commands. For a complete list, see Command-Line Interface in Vagrant documentation.

To start a box:

To connect to a box:

To see all boxes status and their id:

To destroy a box:

Here are some valuable websites and pages for Vagrant users.