The standard MySQL/MariaDB packet has a 4 bytes header + packet body.

The sequence number indicates the exchange number when an exchange demands different exchanges. Whenever the client sends a query, the sequence number is set to 0 initially, and is incremented if clients need to split packets. In more complex situations, when the client and server exchange several packets, e.g authentication handshake, the rule of thumb for clients is to set sequence nr = (last seq.nr from received server packet + 1)

Example: Sending a COM_PING packet COM_PING body has only one byte (0x10):

The server will then return an OK_Packet response with a sequence number of 1.

As mentioned, the packet length is 3 bytes making a maximum size of (2^24 -1) bytes or 16Mbytes-1byte. But the protocol allows sending and receiving larger data. For those cases, the client can send many packets for the same data, incrementing the sequence number for each packet.

The principle is to split data by chunks of 16MBytes. When the server receives a packet with 0xffffff length, it will continue to read the next packet. In case of a length of exactly 16MBytes, an empty packet must terminate the sequence.

Example max_allowed_packet is set to a value > to 40 Mbytes Sending a 40M bytes packet body :

First packet will be :

second packet will be

third packet will be

Note that data of exact size size 2^24 -1 byte must be sent in 2 packets, the first one with length prefix 0xffffff, and the second one with length 0 (length byte 0x000000, seqno incremented). Generally, if data length is an exact multiple of 2^24-1, it must always be followed by an empty packet.

For slow connections, the packet can be compressed. This is activated after the handshake-response-packet when the client indicates [[1-connecting-connecting#capabilities|COMPRESS] capability with the server having this functionality too.

When activated, packets will be composed of 7 bytes a compress header + data. The compression algorithm used is is ZLIB, widely available and supported by many languages and runtimes.

Example: Sending a COM_PING packet COM_PING body when COMPRESS is enabled. This is 1 byte of data that has then no reason to be compressed, so:

The server will uncompress data and then must have the same packet than if there was no compression. If data size needs splitting, it's better to separate compress packet. 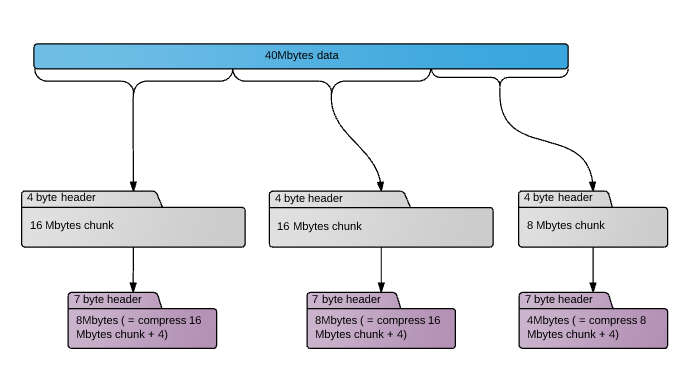