Fusion-io develops PCIe based NAND flash memory cards and related software that can be used to speed up MariaDB databases.

The ioDrive branded products can be used as block devices (super-fast disks) or to extend basic DRAM memory. ioDrive is deployed by installing it on an x86 server and then installing the card driver under the operating system. All main line 64-bit operating systems and hypervisors are supported: RHEL, CentOS, SuSe, Debian, OEL etc. and VMware, Microsoft Windows/Server etc. Drivers and their features are constantly developed further.

ioDrive cards support software RAID and you can combine two or more physical cards into one logical drive. Through ioMemory SDK and its APIs, one can integrate and enable more thorough interworking between your own software and the cards - and cut latency.

The key differentiator between a Fusion-io and a legacy SSD/HDD is the following: A Fusion-io card is connected directly on the system bus (PCIe), this enables high data transfer throughput (1.5 GB/s, 3.0 GB/s or 6GB/s) and the fast direct memory access (DMA) method can be used to transfer data. The ATA/SATA protocol stack is omitted and therefore latency is cut short. Fusion-io performance is dependent on server speed: the faster processors and the newer PCIe-bus version you have, the better is the ioDrive performance. Fusion-io memory is non-volatile, in other words, data remains on the card even when the server is powered off.

MariaDB Server does not currently support atomic writes on Fusion-io devices with any other file systems.

Note: XtraDB has the experimental feature of an increased InnoDB log block size of 4K. If this is enabled, then both redo log I/O and page I/O in InnoDB will match a sector size of 4K.

As of file systems: currently XFS is expected to yield the best performance with MariaDB. However depending on the exact kernel version and version of XFS code in use, one might be affected by a bug that severely limits XFS performance in concurrent environments. This has been fixed in kernel versions above 3.5 or RHEL6 kernels kernel-2.6.32-358 or later (because of bug 807503 being fixed).

For the pitbull machine where I have run such tests, ext4 was faster than xfs for 32 or more threads:

Those numbers are for spinning disks. I guess for Fusion-io memory the XFS numbers will be even worse. 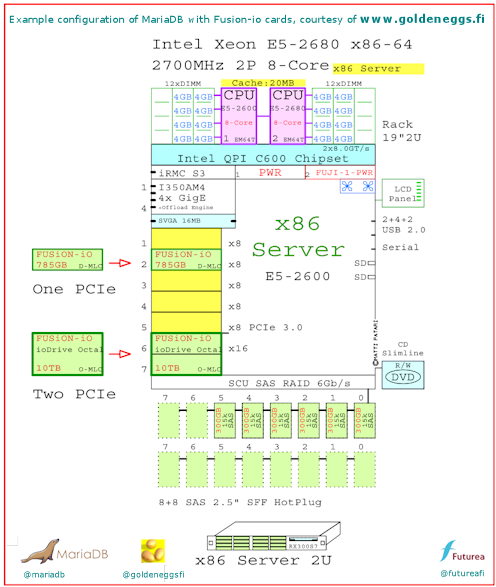 There are several card models. ioDrive is older generation, ioDrive2 is newer. SLC sustains more writes. MLC is good enough for normal use.