CassandraSE is no longer actively being developed and has been removed in MariaDB 10.6. See MDEV-23024.

The Cassandra storage engine is included but is not installed/activated by default.

If using the YUM repositories on Fedora, Red Hat, or CentOS, first install the Cassandra storage engine package with:

If using the Debian or Ubuntu repositories, the Cassandra plugin is in the main MariaDB server package.

To install/activate the storage engine into MariaDB, issue the following command:

You can also activate the storage engine by using the --plugin-load command on server startup.

There was also a preview release based on MariaDB 5.5 with a source tarball and x86_64 binaries for Ubuntu 12.04 Precise Pangolin. It is available from here:

The Cassandra storage engine is not included in any regular MariaDB 5.5 release.

The Cassandra Storage Engine allows access to data in a Cassandra cluster from MariaDB. The overall architecture is shown in the picture below and is similar to that of the NDB cluster storage engine. 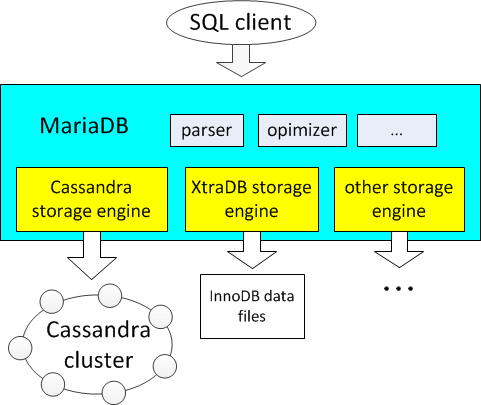 You can access the same Cassandra cluster from multiple MariaDB instances, provided each of them runs the Cassandra Storage Engine:

The primary goal of Cassandra SE (Storage Engine) is data integration between the SQL and NoSQL worlds. Have you ever needed to:

The Cassandra Query Language (CQL) is the best way to work with Cassandra. It resembles SQL on first glance, however the resemblance is very shallow. CQL queries are tightly bound to the way Cassandra accesses its data internally. For example, you can't have even the smallest join. In fact, adding a mere ... AND non_indexed_column=1 into a WHERE clause is already invalid CQL.

Our goal is to let one work in SQL instead of having to move between CQL and SQL all the time.

Does this make Cassandra an SQL database?

No. Cassandra SE is not suitable for running analytics-type queries that sift through huge amounts of data in a Cassandra cluster. That task is better handled by Hadoop-based tools like Apache Pig or Apache Hive. Cassandra SE is rather a "window" from an SQL environment into NoSQL.

Let's get specific. In order to access Cassandra's data from MariaDB, one needs to create a table with engine=cassandra. The table will represent a view of a Column Family in Cassandra and its definition will look like so:

The name of the table can be arbitrary. However, primary key, column names, and types must "match" those of Cassandra.

The table must define a column that corresponds to the Column Family's rowkey.

Note: Multi-column primary keys are currently not supported. Support may be added in a future version, depending on whether there is a demand for it.

Cassandra allows one to define a "static column family", where column metadata is defined in the Column Family header and is obeyed by all records.

Cassandra also allows individual rows to have their own sets of columns. In other words, each row can have its own unique columns.

These columns can be accessed through MariaDB's Dynamic Columns feature. To do so, one must define a column:

Here is an example:

Once define, one can access individual columns with the new variant of the Dynamic Column functions, which now support string names (they used to support integers only).

Cassandra's SuperColumns are not supported, there are currently no plans to support them.

The types must be mapped as follows:

For types like "VARBINARY(n)", n should be chosen sufficiently large to accommodate all the data that is encountered in the table.

Cassandra doesn't provide any practical way to make INSERT different from UPDATE. Therefore, INSERT works as INSERT-or-UPDATE, it will overwrite the data, if necessary.

INSERT ... SELECT and multi-line INSERT will try to write data in batches. Batch size is controlled by the cassandra_insert_batch_size system variable, which specifies the max. batch size in columns.

UPDATE works like one would expect SQL's UPDATE command to work (i.e. changing a primary key value will result in the old record being deleted and a new record being inserted)

Generally, all SELECT statements work like one expects SQL to work. Conditions in the form primary_key=... allow the server to construct query plans which access Cassandra's rows with key lookups.

Full table scans are performed in a memory-efficient way. Cassandra SE performs a full table scan as a series of batches, each of which reads not more than cassandra_rnd_batch_size records.

Cassandra supports Batched Key Access in no-association mode. This means that it requires the SQL layer to do hashing, which means the following settings are required:

Cassandra SE is currently unable to make use of space in the join buffer (the one whose size is controlled by #join_buffer_size). Instead, it will limit read batches to reading not more than cassandra_multiget_batch_size at a time, and memory will be allocated on the heap.

Note that the #join_buffer_size buffer is still needed by the SQL layer, so its value should still be increased if you want to read in big batches.

It is possible to track the number of read batches, how many keys were looked-up, and how many results were produced with these status variables:

The following system variables are available:

The following status variables are available:

A note about Cassandra 1.2

Cassandra 1.2 has slightly changed its data model, as described at http://www.datastax.com/dev/blog/thrift-to-cql3. This has caused some of Thrift-based clients to no longer work (for example, here's a problem experienced by Pig: CASSANDRA-5234).

Currently, Cassandra SE is only able to access Cassandra 1.2's column families that were defined WITH COMPACT STORAGE attribute.