This page shows the results for benchmarking the following configuration:

The test is performed using the automation script under /mariadb-tools/dbt3_benchmark.

The tests were performed on pitbull.askmonty.org. It has the following parameters:

This test is performed with the following parameters:

Follow the instructions in DBT3 automation scripts to prepare the environment for the test.

For that test you should set the SCALE_FACTOR parameter to 10 for the following files before the test:

NOTE: In future versions the scale factor will be passed in as an input parameter to launcher.pl instead of being test configuration parameter.

After the environment is prepared, the following command should be executed in the shell:

Here is the graphics of the results: 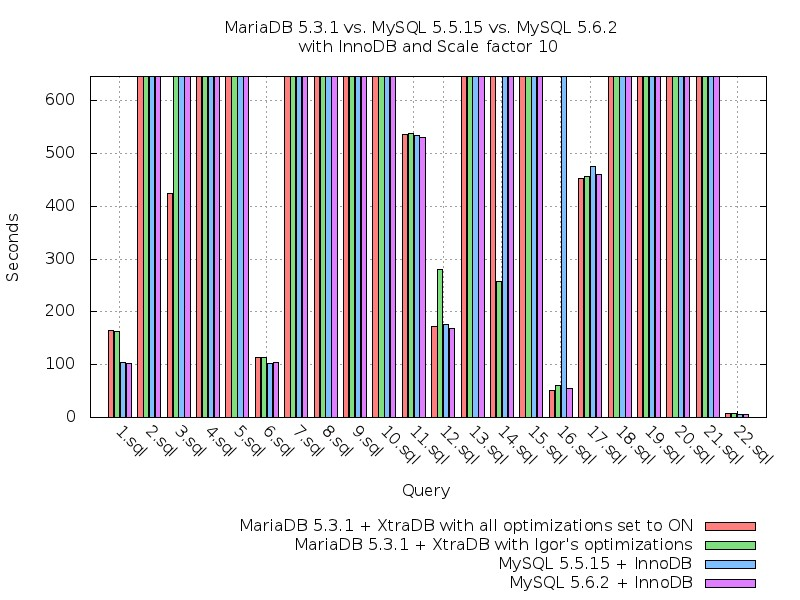 NOTE: Queries that are cut off by the graphics have timed out the period of 600 seconds for that test.

Here are the actual results:

The archived folder with all the results and details for that benchmark can be downloaded from: http://askmonty.org/wiki/Image:Res_myisam_timeout_120_s10_2011-09-15_190613.zip

From the graphics we can see that for the first query MySQL has performed better than MariaDB with about 37%.

For the third query on the other hand MariaDB with all optimizations set to ON is the only one query that returned results before the timeout exceeded. This means that it has at least 30% better performance. Also there is some option that could optimize Igor's set of settings even more for that query. For the particular numbers, the same test should be performed with longer timeouts.

For query #12 Igor's settings could be readjusted, so that the query execution time could fall with 38%.

Igor's settings turned out to be the only one that could finish query #14 before the timeout exceeded.

From query #16 we can see that MySQL have made a great performance improvement from version 5.5.15 to 5.6.2 to make the query finish at least ten times faster.

For all the other queries the results are either statistically the same, or the queries have timed out for all configurations and the test should be repeated with longer timeout limit.

Most of the queries have timed out for the given period of 10 minutes per query and until a new test with longer timeout is performed, no correct comparison summary could be made.