Mariabackup is an open source tool provided by MariaDB for performing physical online backups of InnoDB, Aria and MyISAM tables. For InnoDB, “hot online” backups are possible. It was originally forked from Percona XtraBackup 2.3.8. It is available on Linux and Windows.

MariaDB 10.1 introduced features that are exclusive to MariaDB, such as InnoDB Page Compression and Data-at-Rest Encryption. These exclusive features have been very popular with MariaDB users. However, existing backup solutions from the MySQL ecosystem, such as Percona XtraBackup, did not support full backup capability for these features.

To address the needs of our users, we decided to develop a backup solution that would fully support these popular MariaDB-exclusive features. We did this by creating Mariabackup, which is based on the well-known and commonly used backup tool called Percona XtraBackup. Mariabackup was originally extended from version 2.3.8.

Mariabackup supports all of the main features of Percona XtraBackup 2.3.8, plus:

MariaDB Enterprise Backup supports some additional features, such as:

Each Mariabackup release only has one version number, and it is the same as the version number of the MariaDB Server release that it is based on. For example:

It is not generally possible, or supported, to prepare a backup in a different MariaDB version than the database version at the time when backup was taken. For example, if you backup MariaDB 10.4, you should use mariabackup version 10.4, rather than e.g 10.5.

However, occasionally, a MariaDB Server or Mariabackup release will include bug fixes that will break compatibility with previous releases. For example, the fix for MDEV-13564 changed the InnoDB redo log format in MariaDB 10.2.19 which broke compatibility with previous releases. To be safest, a MariaDB Server release should generally be backed up with the Mariabackup release that has the same version number.

Mariabackup from MariaDB 10.1 releases may also be able to back up MariaDB Server from MariaDB 5.5 and MariaDB 10.0 releases in many cases. However, this is not fully supported. See MDEV-14936 for more information.

The mariabackup executable is included in binary tarballs on Linux.

Installing with a Package Manager

Mariabackup can also be installed via a package manager on Linux. In order to do so, your system needs to be configured to install from one of the MariaDB repositories.

On RHEL, CentOS, Fedora, and other similar Linux distributions, it is highly recommended to install the relevant RPM package from MariaDB's repository using yum or dnf. Starting with RHEL 8 and Fedora 22, yum has been replaced by dnf, which is the next major version of yum. However, yum commands still work on many systems that use dnf. For example:

On Debian, Ubuntu, and other similar Linux distributions, it is highly recommended to install the relevant DEB package from MariaDB's repository using apt-get. For example:

On SLES, OpenSUSE, and other similar Linux distributions, it is highly recommended to install the relevant RPM package from MariaDB's repository using zypper. For example:

The mariabackup executable is included in MSI and ZIP packages on Windows.

When using the Windows MSI installer, mariabackup can be installed by selecting Backup utilities: 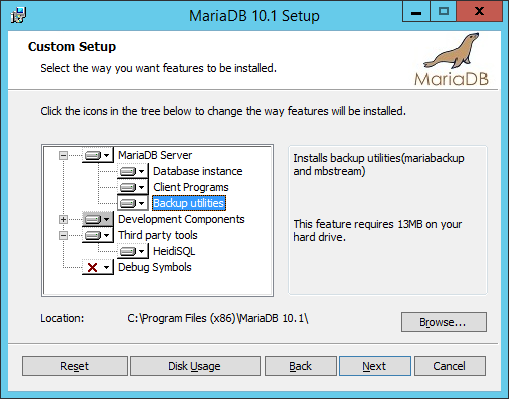 The command to use mariabackup and the general syntax is:

For in-depth explanations on how to use Mariabackup, see:

Options supported by Mariabackup can be found here.

mariabackup will currently silently ignore unknown command-line options, so be extra careful about accidentally including typos in options or accidentally using options from later mariabackup versions. The reason for this is that mariabackup currently treats command-line options and options from option files equivalently. When it reads from these option files, it has to read a lot of options from the server option groups read by mysqld. However, mariabackup does not know about many of the options that it normally reads in these option groups. If mariabackup raised an error or warning when it encountered an unknown option, then this process would generate a large amount of log messages under normal use. Therefore, mariabackup is designed to silently ignore the unknown options instead. See MDEV-18215 about that.

The following options relate to how MariaDB command-line tools handles option files. They must be given as the first argument on the command-line:

In 10.5 and later the required privileges are:

Prior to 10.5, the required privileges are:

If your database server is also using the MyRocks storage engine, then the user account that performs the backup will also need the SUPER global privilege. This is because Mariabackup creates a checkpoint of this data by setting the rocksdb_create_checkpoint system variable, which requires this privilege. See MDEV-20577 for more information.

To use the --history option, the backup user also needs to have the following privileges granted:

The user account information can also be specified in a supported client option group in an option file. For example:

Mariabackup does not need to authenticate with the database server when preparing or restoring a backup.

Mariabackup has to read MariaDB's files from the file system. Therefore, when you run Mariabackup as a specific operating system user, you should ensure that user account has sufficient permissions to read those files.

If you are using Linux and if you installed MariaDB with a package manager, then MariaDB's files will probably be owned by the mysql user and the mysql group.

Mariabackup will also query the server to determine which encryption keys it needs to use.

In other words, Mariabackup is able to figure out a lot of encryption-related information on its own, so normally one doesn't need to provide any extra options to backup or restore encrypted tables.

Files Backed up by Mariabackup

Mariabackup backs up many different files in order to perform its backup operation. See Files Backed up by Mariabackup for a list of these files.

Mariabackup creates several different types of files during the backup and prepare phases. See Files Created by Mariabackup for a list of these files.

Those versions do not read server options from the following option groups supported by the server:

Prior to MariaDB 10.1.36, MariaDB 10.2.18, and MariaDB 10.3.10, if you were performing a --copy-back operation, and if you did not explicitly specify a value for the datadir option either on the command line or one of the supported server option groups in an option file, then Mariabackup would not default to the server's default datadir. Instead, Mariabackup would fail with an error. For example:

The solution is to explicitly specify a value for the datadir option either on the command line or in one of the supported server option groups in an option file. For example:

Prior to MariaDB 10.2.19 and MariaDB 10.3.10, if concurrent DDL was executed while the backup was taken, then that could cause various kinds of problems to occur.

One example is that if DDL caused any tablespace IDs to change (such as TRUNCATE TABLE or RENAME TABLE), then that could cause the effected tables to be inconsistent in the backup. In this scenario, you might see errors about mismatched tablespace IDs when the backup is prepared.

Some of the problems related to concurrent DDL are described below.

Problems solved by other bug fixes:

These problems are only fixed in MariaDB 10.2 and later, so it is not recommended to execute concurrent DDL when using Mariabackup with MariaDB 10.1.

Prior to MariaDB 10.2.10, Mariabackup users could run into issues if they restored a backup by manually copying the files from the backup into the datadir while the directory still contained pre-existing InnoDB redo log files. The backup itself did not contain InnoDB redo log files with the traditional ib_logfileN file names, so the pre-existing log files would remain in the datadir. If the server were started with these pre-existing log files, then it could perform crash recovery with them, which could cause the database to become inconsistent or corrupt.

In MariaDB 10.2.10 and later, Mariabackup prevents this issue by creating an empty InnoDB redo log file called ib_logfile0 as part of the --prepare stage. That way, if the backup is manually restored, any pre-existing InnoDB redo log files would get overwritten by the empty one.

Too Many Open Files

If Mariabackup uses more file descriptors than the system is configured to allow, then users can see errors like the following:

When this error is encountered, one solution is to explicitly specify a value for the open-files-limit option either on the command line or in one of the supported server option groups in an option file. For example:

An alternative solution is to set the soft and hard limits for the user account that runs Mariabackup by adding new limits to /etc/security/limits.conf. For example, if Mariabackup is run by the mysql user, then you could add lines like the following:

After the system is rebooted, the above configuration should set new open file limits for the mysql user, and the user's ulimit output should look like the following: