Now I repeat the tests from that post with the native sequences in MariaDB Server 10.3.9.

Changes in the benchmark

With emulated sequences, one needs two SQL statements to insert a new row. First an UPDATE to push the sequence to the next number, then the INSERT itself, using LAST_INSERT_ID() in the VALUES list.

With native sequences we don’t need the UPDATE any more and can use the NEXTVAL() function in the VALUES list. Alternatively you can use NEXTVAL() as DEFAULT value for the column. There is no difference in performance for the last two variants.

The general benchmark setup is the same as last time. We create a native sequence and a target table. The benchmark script (a Lua script for sysbench) inserts a row into the target table, using the NEXTVAL() from the sequence as primary key. This is repeated in a loop. Optionally this is done in transactions, bundling inserts in batches of 10. The workload is run with different concurrency, starting with 1 benchmark thread and then going up to 128. 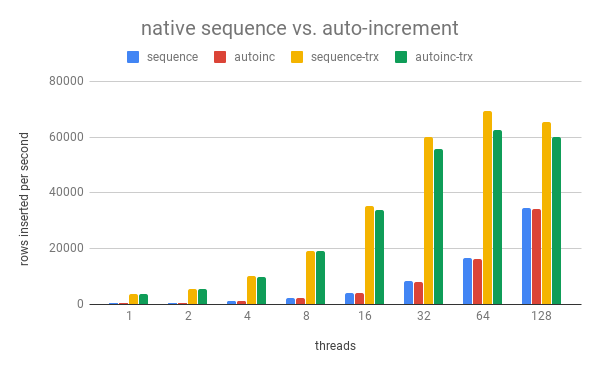 Observations: doing the inserts in transactions of 10 is again faster than inserting row-by-row. This is expected. But we can also see that the native sequence is even faster than auto-increment. This is because a sequence has by default a cache of 1000 while there is no such cache for auto-increment.

The native sequences introduced in MariaDB Server 10.3 deliver excellent performance. At least the same – and in edge cases even better – than auto-increment. Still sequences are more versatile with configurable counting direction and the possibility to use them for multiple tables.