If you are a Software Developer, DevOps Engineer, DBA, or Systems Administrator, you need a Raspberry Pi or an equivalent single-board mini-computer. Modern distributed cloud applications run on infrastructure that requires work on networking, security, provisioning, and monitoring. These are valuable skills that you can exercise by using affordable devices that emulate the real world more closely than virtual machines or Docker containers do. Here’s how Alex Ellis sums it up:

Having a Raspberry Pi is almost like having an Amazon t2.nano EC2 instance. Just for fun here’s a comparison:

This article covers a specific use case—configuring a portable database server that you can connect via WiFi or through USB Ethernet emulation. It covers the steps to set up a SQL database on a Raspberry Pi Zero W 2—one of the smallest single-board computers available—but you can adapt the instructions to other models and brands like Raspberry Pi 4, Banana Pi BPI-M2 Zero, or Radxa Zero.

During my experiments, I found that SQLite, TinyDB, and MariaDB are the best databases for Raspberry Pi devices and, in general, for IoT applications. They are compatible with Raspberry Pi hardware and don’t consume a lot of resources. They also support a variety of programming languages and tools. In this article, you’ll learn how to install the popular open-source MariaDB database server and how to connect to it remotely from your computer using DBeaver.

Here is a list of items needed to turn your Raspberry Pi into a database server: 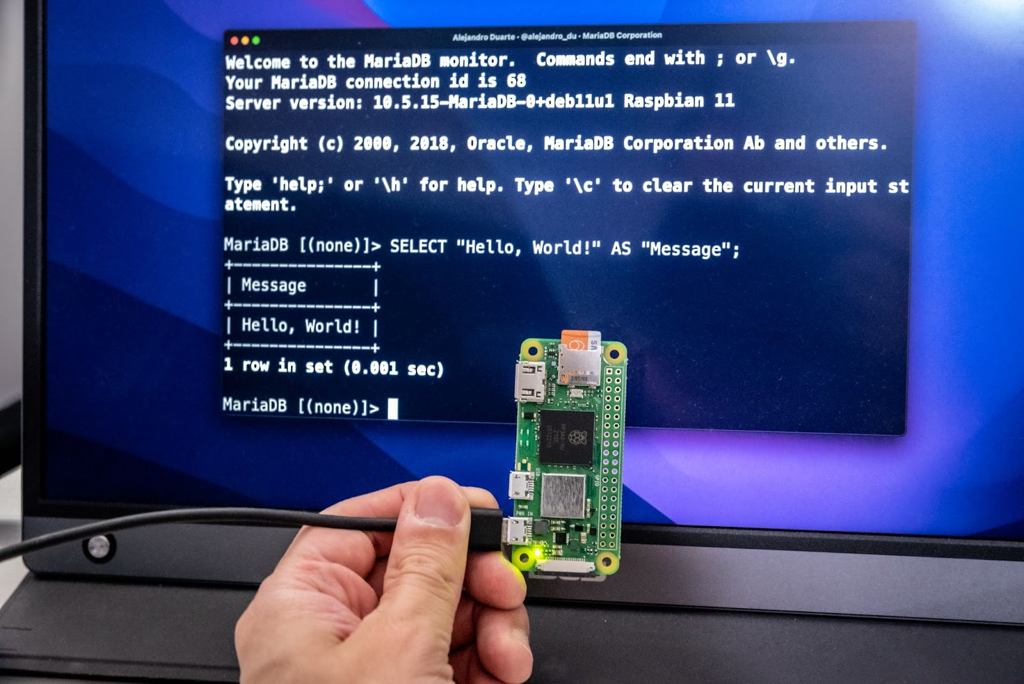 You have to install an operating system on the microSD card. Try to get a fast card as this will make a huge impact on the performance of the database in particular and the device in general. 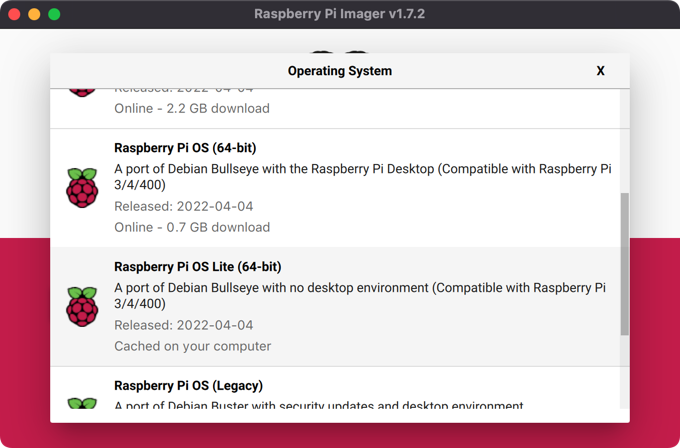 2. Choose your storage device. Make sure to select the correct one (the microSD card).

3. Click on the gear icon on the bottom right corner and configure the following:

4. Save the settings and click on WRITE. This will write a bootable Raspberry Pi OS on the card. 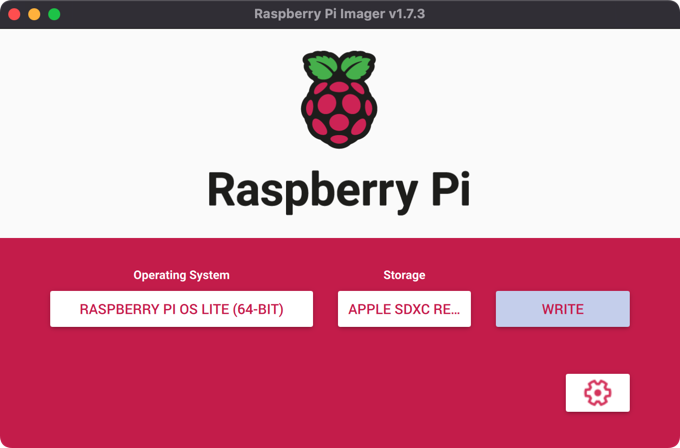 The software asks if you are willing to continue and erase all the existing data on the device. Make sure you have backed up your files and then click on, YES.

When the process finishes, plug the microSD card into the Pi, grab a micro USB cable, and connect it to a power supply. I used an iPhone charger. Use the right-most micro USB port on the Pi. The mini-computer should boot now. Be patient. The first boot can take some time. Even minutes. But subsequent boots will be faster.

You’ll be asked to add the Pi’s key to the list of known hosts. Answer “yes” and introduce the password that you configured. You are in!

6. Before anything else, update your system:

TIP: If you don’t want to type sudo all the time, use sudo su before running the commands. Just remember to type exit after you are done. Be careful as you’ll gain sudo privileges.

Time to install some useful software. A database. A MariaDB database. MariaDB is an open-source relational database that uses pluggable, purpose-built storage engines to support workloads that previously required a variety of specialized databases. You can combine these storage engines in the same server and run cross-engine SQL queries (queries that join tables on different storage engines).

«In general, Docker equals or exceeds KVM performance in every case we tested. Our results show that both KVM and Docker introduce negligible overhead for CPU and memory performance (except in extreme cases).»

Installing Docker is pretty simple, run the following commands on your Raspberry Pi:

Check that Docker is running correctly:

You should see active (running) reported by the service: 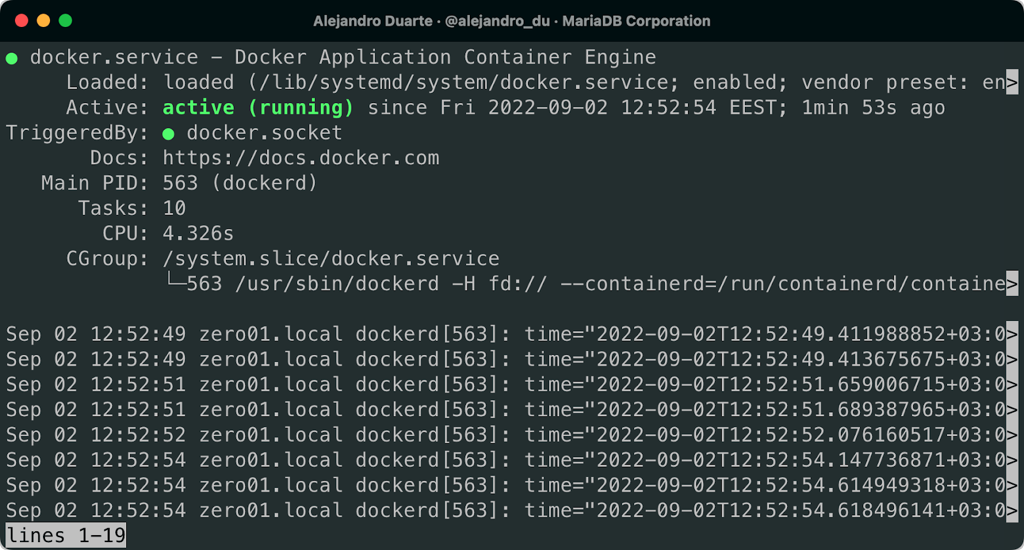 Docker service up and running

If the service reports failed—which actually happened to me during my experiments—try rebooting the Pi:

To spin up a MariaDB instance run the following command (go ahead and try it, you can cleanly remove it later if you want):

We are passing several flags:

TIP: If you installed a 32-bit OS you can use the MariaDB Docker image provided by the linuxServer.io team. This image includes support for linux/arm/v7 architectures. Just replace mariadb:latest with linuxserver/mariadb:latest.

Check that the container is up and running:

Connect to the database from within the container (we’ll see how to connect from outside later): 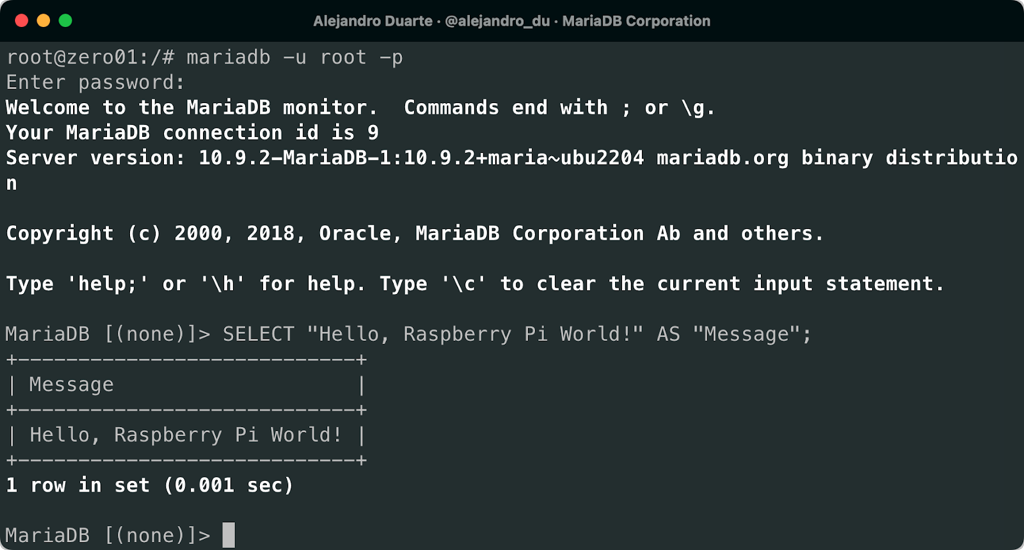 Once you are done, quit the SQL client and exit the container:

That was fun, but let’s try a different configuration. Stop and remove the mariadb container and its associated volume:

Run a new container as follows:

This creates and runs a Docker container with a MariaDB database that:

This is a more secure database, except for the fact that it uses password as the password for both the root and user users (don’t do this in production!).

Connecting to the database from a laptop using DBeaver

Let’s connect to this database from your working laptop or computer using DBeaver. 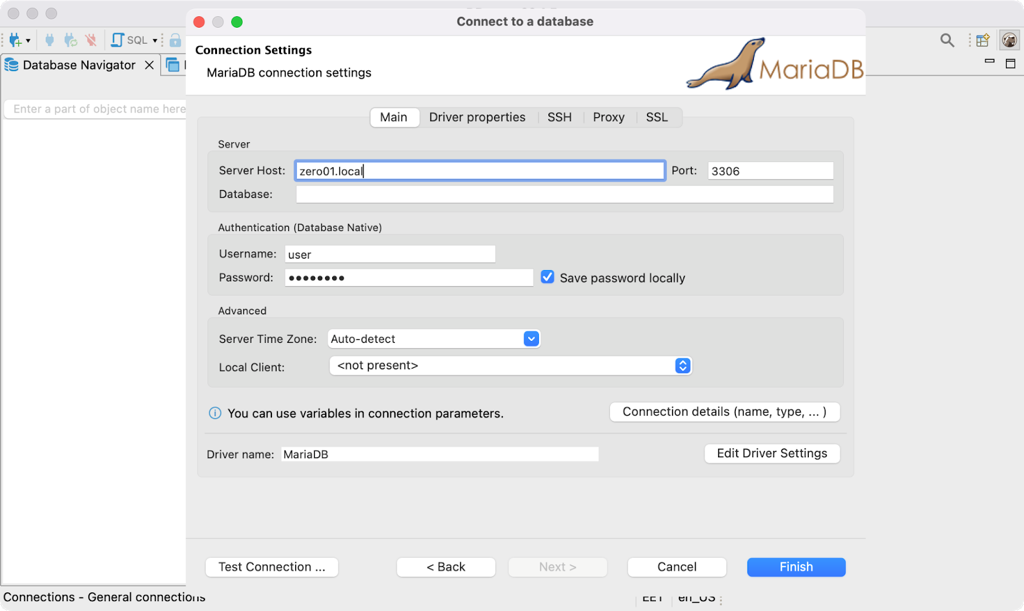 2. Test the connection and then click on the Finish button. You are now connected to a portable database from your laptop!

3. Try importing the database from the https://www.mariadbtutorial.com website. Here’s a direct link to ZIP file that contains the script. Extract this file and open the SQL file in DBeaver. Select a data source by clicking on the little database icon in the toolbar and select the connection you just created: 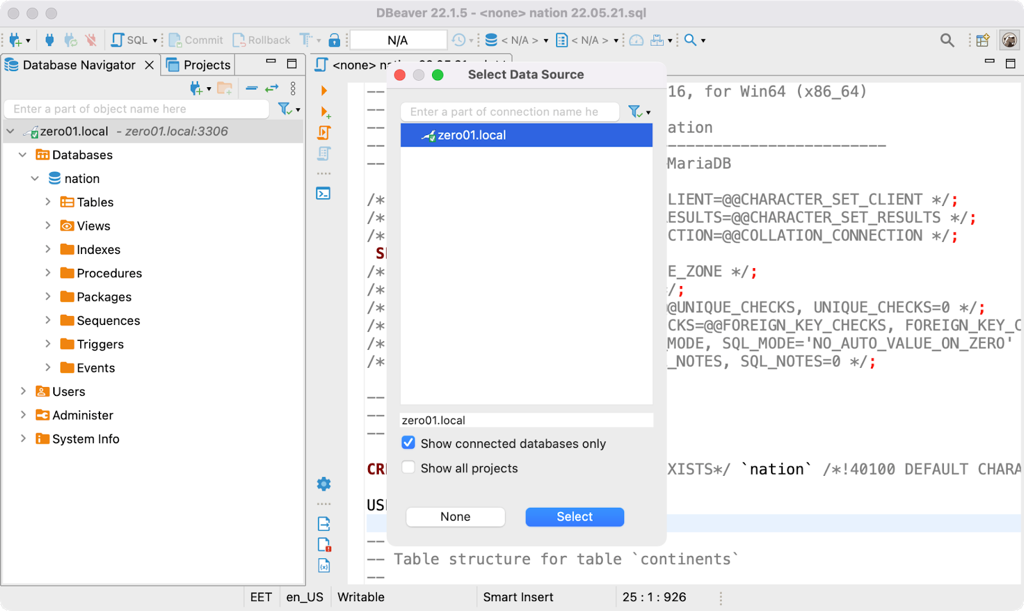 Run the query. I’ll let you figure out this by yourself (hint: use the vertical toolbar). Here’s an example result: 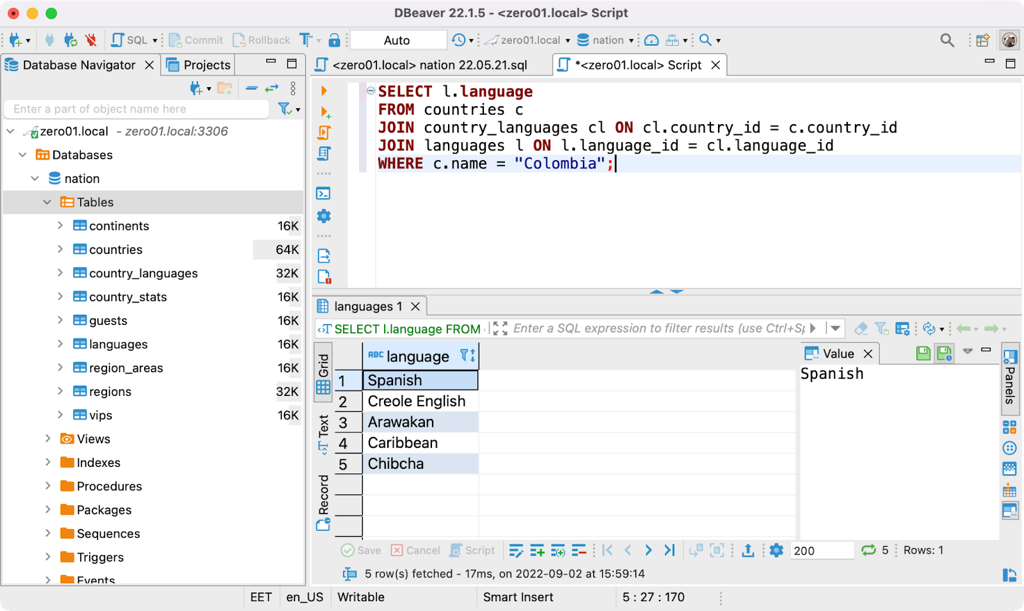 Here are some questions that you can answer using SQL queries on this database:

USB Gadget Ethernet allows you to connect your Raspberry Pi via USB to your computer and make it look as if it was connected to the network. This is useful when you want to connect to a different network and don’t want to hassle configuring the new network on the Pi.

If you haven’t, SSH into the Pi:

At the very end of the file, add the following line:

Save the file and exit the editor. Now edit the following file:

After rootwait add the modules to load as shown here:
... rootwait modules-load=dwc2,g_ether

Save the file and exit the editor. Now power off the Pi:

Wait until the green LED turns off and disconnect the Pi from the power supply. Connect the micro USB end of the cable to the second right-most port on the Pi and the other end to your computer. Wait until the Pi boots and connect to it via SSH.

Congrats! Now you have a truly portable MariaDB database server that you can carry around and use everywhere. Consider getting a nice case for the Pi. I can recommend this one by Flirc: 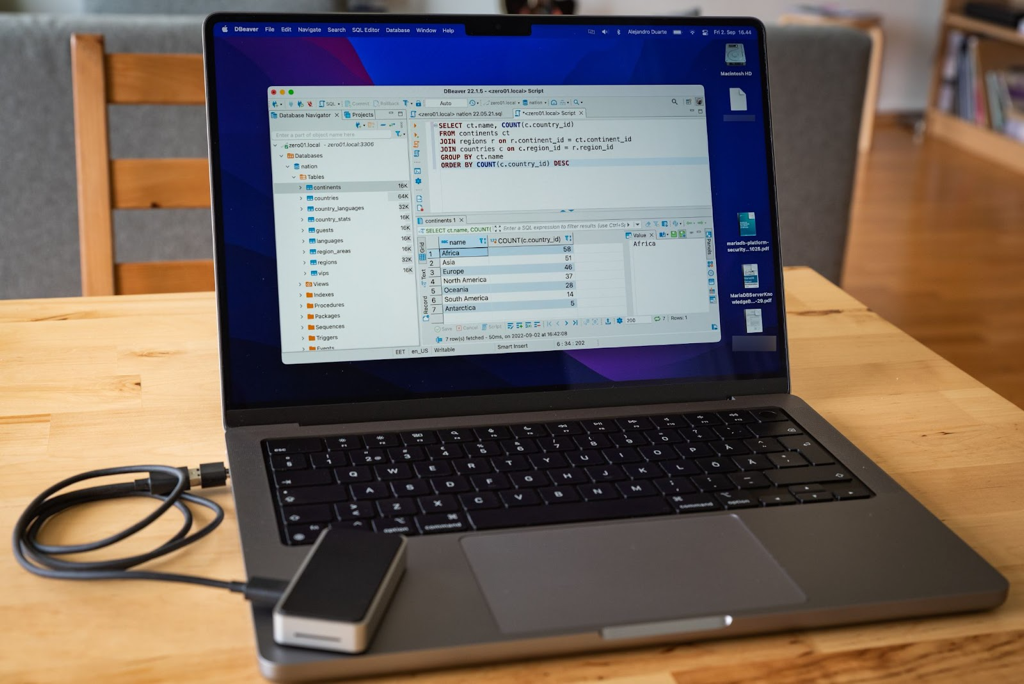 Do you have another Pi laying around somewhere? They are scarce nowadays, give them some use! For example, try setting up basic replication or building something like this 32-core Raspberry Pi 4 cluster. Then try consuming the database from Java, JavaScript/Node.js, Python, and C++ applications using the official MariaDB connectors.