The MariaDB OpenWorks user conference is underway, and the tone was set with a live-streamed keynote that emphasized how MariaDB customers can break away from the database status quo. When companies free themselves from “vendor indoctrination” and the “egregious force” of big cloud vendors, they open up an ocean of possibilities for facilitating their own success, said MariaDB CEO Michael Howard.

Convention says SQL can’t scale and you have to separate analytics from transactions. But the new MariaDB Platform X3 shows those conventions are made to be broken.

Samsung’s lead database architect, Kwangbock Lee, joined Howard onstage to share how the Clustrix technology that’s part of MariaDB Platform eliminated the need for sharding, enabling Samsung to scale to 230 million transactions per hour while lowering costs by 50% over their previous solution – and doing it all in the cloud.

We are not telling the story, THEY ARE!! #MariaDBOpenWorks pic.twitter.com/ErO7964kuH

QBerg’s infrastructure manager, Vittorio Guglielmo, took the stage to share how MariaDB Platform enables QBerg’s customers to analyze long-term and historical pricing data themselves. QBerg switched from Percona due to MariaDB’s capacity to drive both analytical and transactional workloads together. That unified approach led to exceptional results: previously a ~42 million-record query took 99 seconds, but that was reduced to 2 seconds with MariaDB’s platform, thanks to the use of columnar data.

Thomas Boyd, director of product marketing at MariaDB, drove home the point that flexibility is the main idea behind MariaDB technology – businesses don’t know exactly what they may need in the future. After all, regulations change, hypergrowth happens, and customers have new data-intensive demands. Boyd asked, Why not use MariaDB to ensure flexible access to all of your data?

MariaDB’s VP of customer success, Austin Rutherford, explored the benefits of MariaDB’s fully managed service, making it clear that it’s much more than a way to offload database operations. In a series of slides, he demonstrated how the MariaDB Platform Managed Service outperforms Amazon’s managed services. As icing on the cake, technical architect Alan Attard of Gaming Innovation Group (GiG), which uses the MariaDB Managed Service, described it as “proactive 911” for GiG’s databases. 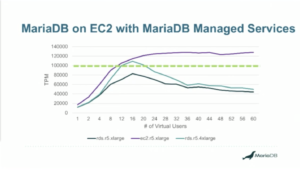 But, he noted, MariaDB’s most important focus is the continual hardening of our server to meet enterprise-level requirements and expectations. To that end, Howard announced MariaDB Enterprise Server for customers looking for high-end features such as augmentation into an audit plug-in, clustered encryption, and various aspects of backup. Pat Casey, ServiceNow co-founder, noted that he’s looking forward to this new offering, as ServiceNow currently runs ~100K servers with MariaDB.